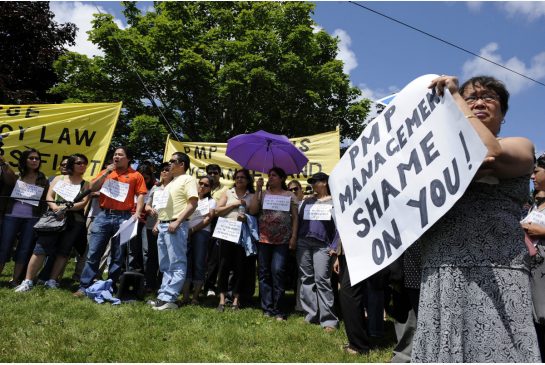 A Sad Page From Being Middle-aged Unemployed Immigrants

Immigrants come to Canada to secure a future for themselves and their families. Yet a recent study undertaken by Ryerson University has painted a gloomy picture of the long lasting impact that the 2008 recession has had on immigrant workers.

The study followed hundreds of former employees of Progressive Mould Products (PMP) over a five year period to determine whether or not they were able to achieve any semblance of a middle class life after their plant declared bankruptcy in 2008. Sadly those interviewed reported that they were much worse off now as compared to when they arrived in Canada. The reported entitled “An Immigrant All Over Again? Recession, Plant Closures, and Older racialized immigrant workers: A case study of the workers of Progressive Moulded Products” profiles the experiences of immigrant workers who arrived in Canada in the 70s and 80s. The researchers found that:

* Only one third (34%) of participants secured permanent full time employment, two thirds of former workers were either precariously employed or unemployed
* 77% of workers wages were worse off than what they earned from PMP
* 36% of male workers and 37% of women workers reported a wage drop of $5 an hour or more
* 52% or women workers and 42% of men reported that it was difficult to make ends meet since PMP went bankrupt
* 49.4% of workers felt their health worsened after the plant closures.
* 85% of workers felt age barriers was the primary reason while they could not find permanent work
* 67% felt that they were racially discriminated in the labour market.

Plant restructurings are never told from the vantage point of the most impacted. This is why this research project is so compelling. It provides both a statistical overview of the real costs that plant closures has on the racialized and gendered workforce but also the resistance that was undertaken by this non unionized workforce to fight for basic rights to severance and termination pay.

In June 2008, PMP an auto-parts manufacturer summarily closed their factory throwing over 2400 workers out of work. Without receiving any severance or termination pay, the unemployed workers blockaded the plant to leverage the company to pay millions of dollars owed in severance and termination pay.
The workers were thrown under the bus by both their employer and both levels of government. The publication highlights how employers are able to get away with plant closures through both provincial and federal laws that favour employers rather than workers. Bankruptcy laws put workers last on the list to be paid when monies are owing. Creditors, Banks and a whole slew of other interests are given top priority while the people who put profit in the pockets of employers are left with nothing.

Federal and provincial laws that are meant to protect vulnerable workers such as the PMP workers provided little comfort. Bankruptcy laws didn’t guarantee paying severance and termination once a company claimed they could no longer afford to pay. Federal Income Support programs such as Employment Insurance does not provide the necessary income supports for workers in long term non permanent employment relations, and Provincial employment standards lacks both the necessary enforcement and legislative protection to assure workers that their interests would be protected. The study also highlighted the increasing role of temp agencies that are not adequately monitored or regulated by the province of Ontario. For those PMP workers who did find work, it was often through temp agencies where their work was temporary for less wages than their permanent counterparts and often employed under more dangerous conditions because of their temporary nature of their contracts.

The story of PMP is not an exception rather it’s the norm. It represents the growing underclass of work where we find older racialized and gendered immigrants employed in some of the most dangerous, dirty and deadly jobs one can find. The snapshot portrayed by this study reflects the realities of millions of workers across Canada.

The study provides both pragmatic and long term solutions as steps in reforming our labour market. From implementing childcare to assist mothers who want to re-enter the labour market, to ensuring access to settlement services for all immigrants, to regulating employment standards to protect workers employed by temp agencies, increases in the minimum wage. The report clearly states that the labour market will not take care of itself, steps should be undertaken to alleviate the disparities that exist for older racialized and gendered immigrant workers. As this economic crisis continues, we need to continue supporting long standing demands for reforms to laws to protect workers from bankruptcy and to restore employment equity. We also need to embrace visionary demands; the problems facing racialized immigrant communities differ from previous generation of immigrants. Where once a generous safety net existed to support older workers, today it is non-existent. This report provides a bold framework that if enacted upon will give workers like these PMP workers a fighting chance in today’s labour market.

Our parents made sacrifices when coming to Canada, they worked hard and saved while working minimum wage jobs so they could put us through school, and take care of our basic necessities; they undertook mortgages so we could be accorded a life of decency. Thirty or Forty years after they laid roots in this society they are faring much worse than when they arrived. PMP is our collective story. It is a story of struggle and resistance. of broken hearts and of lost dreams. But it is also a story of hope and a yearning for change. Its an unfinished story that we can do something about. These women and men are our mothers and fathers, brothers and sisters, By advocating for healthy and decent employment we can take the necessary steps to implement changes so our elders no longer need to sacrifice and toil under indecent and inhumane working conditions.